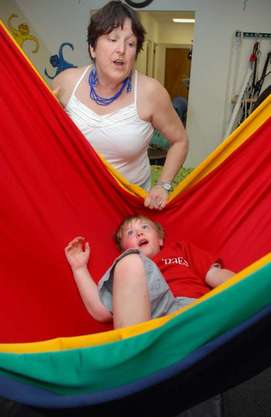 Photos: Dru Nadler
The Dart: Calming the senses on the West Side
At a West Side office, woman provides therapy to help children learn to cope with sensory problems
Harold Davis

STAMFORD -- When a child has behavioral issues, the problem might stem from sensory disorders, which can cause increased sensitivity and irritability as well as affect balance, motor skills and cause easy fatigue.

Enter Crae Akerson and her business, Celebrating Children in Stamford. Akerson provides occupational therapy and audio processing help for children. This week The Dart led The Advocate to Akerson's practice in the office complex at the corner of Myano Lane and West Main Street. Her business is more of a playroom than a traditional office. It has trampolines, tunnels, padded mats, lots of games and more.

Mary Donovan was gracious enough to let us observe her sons, Jack and Brian, during their session with Akerson. Donovan started bringing her boys to Akerson a year ago, after noticing that they were easily frustrated and had low endurance. Since then, the boys, who turn 6 in August, have been improving steadily.

"They were very sensitive to sound, and shutting  down when there was music time at school. They were like statues when the other children were dancing," Mary Donovan said.

"They've made huge improvements and now they're interacting with their peers. We just want them to be the best that they can be."
Akerson led Jack Donovan to a room that contained a kid's pool full of dried kidney beans instead of water. She instructed him to get in and play around in it, and she did the same. Akerson mentioned that sensory impairment can make people sensitive to different textures, and the beans help get a child used to the sensation.She then asks him to find some fake gold coins that she hid in the pool prior to his arrival.
"See if you can find six gold coins," Akerson asked.
"Found one!" Jack Donovan said excitedly.

He found three coins pretty quickly. His eyes lit up as he discovered them, his fingers sifting through the beans to find more.
"You're finding them like crazy," Akerson said in encouragement.
Akerson then had Jack complete an obstacle course, which included activities like pulling himself on a scooter board across the floor and jumping on trampoline while counting to 10.

"All of this stuff works on sensory integration," Akerson explained.

Akerson chose to pursue occupational therapy because her daughter, Samantha, had sensory integration issues. Though information about the problem was scarce in those days, and her interest in it led her to become a therapist. She has been in practice since 1997, and started her own practice two years ago. Her daughter is 21 now and doing fine, studying to be an occupational therapist as well.

"I love being with kids, I love seeing their joy when they're feeling better about life and not getting frustrated. I also enjoy when a teacher tells me that a child is paying attention so well."

Akerson next had Brian and Jack get on a dual swing attached to the ceiling. She helped the boys get settled and assisted them in getting the swing to rotate. Eventually she had the boys move the swing by themselves. Using the swing helps build endurance and balance, Akerson said. As they boys got some steady rotations going, she told Brian to straighten out his body and lift his legs higher, like his brother was doing, to get the most mobility out of the swing.

After the boys convinced her to let them have one last go around on the swing, Akerson gave them a game to play that works on improving their grip when using a crayon or pencil. She had them put pegs in a pegboard using one hand. The hard part was they had to do it while holding a small marshmallow in the same hand. This would help both manual dexterity and writing skills.
While the task was challenging for Jack and Brian, Akerson was patient and encouraging. The boys at last got through two rows of pegs on their boards, but still pleaded to do more. Letting them eat the occasional marshmallow seemed to work.